Gluten-free diets are becoming more common among adults these days even in the absence of a clinical diagnosis of a gluten intolerance. In children however, a gluten-free diet is usually reserved only for those with a confirmed diagnosis of coeliac disease. And although there is a widely accepted blood test for coeliac disease, there are some important things to consider both before and after the test.

Firstly, what is coeliac disease? It is an autoimmune condition which requires lifelong avoidance of the protein gluten. Gluten is found in the cereals wheat, rye and barley, and all their derivatives. Although in other countries, pure oats are permitted, The Food Safety Australia and New Zealand (FSANZ) along with Coeliac Australia recommend that oats be avoided as although they don’t contain gluten, studies have shown that 5-15% of coeliacs react to the oat protein Avenin. Research continues in this area.

When undergoing tests to diagnose coeliac disease, it is important that you have a regular source of gluten in your diet. This means about 4 slices of bread per day for an adult or 2 for a child. Gluten needs to be present for about 6 weeks before testing to obtain reliable results.

Then once a diagnosis has been confirmed, people, even if asymptomatic, should follow a gluten-free diet. Coeliac disease is not a matter of tolerance levels and continued inclusion increases the risk of osteoporosis (brittle and weak bones), cancer, reduced fertility and general poor nutritional status. 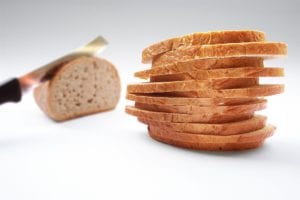 When trying to exclude gluten, consider cross contamination as this is often an issue – using separate utensils such as toasters and chopping boards is important.

Usual symptoms might present such as anaemia, lethargy, GI upsets but people can also be asymptomatic. Coeliac can also develop at any stage in life and 1st degree relatives have a 10% or more chance of also being affected by coeliac disease.